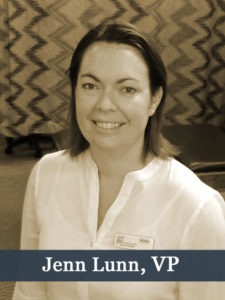 Jenn began her role at Collegiate as an administrative assistant and, after finishing a diploma in Business Administration & Insurance from Mount Royal University & completing her CIP designation, has taken on a new role which includes bookkeeping, clinic managing & as well as co-owner of the Red Deer Campus location.

After completing a Degree in Physical Education from the University of Alberta in 2005, she spent 5 years working for Hockey Alberta in female hockey and trainer development.

Jenn started her schooling at Red Deer College where she played hockey for the RDC Queens from 2001-2003 while obtaining Diplomas in Coaching and Sport Administration.

In her free time she plays volleyball & tries to get out for as much golf as she can.