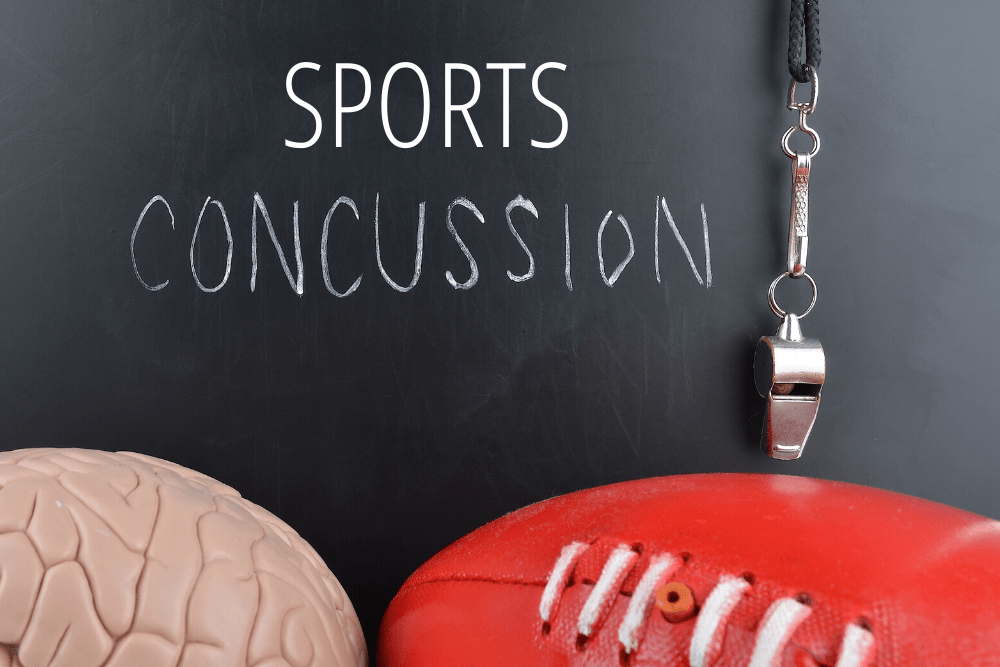 What is a Sports Concussion?

A sports concussion (mild traumatic brain injury) occurs when the brain moves quickly within the skull. You do not need to hit your head directly. It can occur from any injury involving movements including but not limited to: a tackle, a fall or a collision with an opponent to cause a force transferred up to the brain, resulting in a concussion. There is no structural damage to the brain. It is highly unlikely an MRI or CT scan will not show any bleeding or bruising of the brain.

It takes time for the brain to replenish those energy stores and re-balance the ions. During that time your brain has less energy and will be prone to feelings of fatigue, confusion and difficulty concentrating. You may also experience other symptoms such as headache, dizziness, nausea or the feeling like you’re “in a fog”. Personality and emotions are regulated by a part of the brain (the frontal cortex), so you may experience emotional and personality changes temporarily. Things like being more irritable or upset.

Is my brain damaged?

Not in the sense that people usually think about brain damage. There is no structural damage to the brain but there is functional damage. Confusing eh? I find the analogy of a phone helpful here. Say you had a phone that was quite old. When the phone is turned off it seems perfectly fine. The hardware is completely intact, not a scratch. However, when you turn it on you find it’s slow to start up, the apps are slow to load and some of them crash. The software is not working properly.

A sports concussion is similar. The hardware of the brain is fine, nothing shows up on an MRI scan because the structure of the brain is not damaged. However, the software is not working properly. So when you try and do things like concentrate, exercise, work or any other functional task the brain controls, you have trouble.

Do I need to go to the Hospital?

If you answer “yes” to any of the following questions you should call 911 or go to the Emergency department immediately: 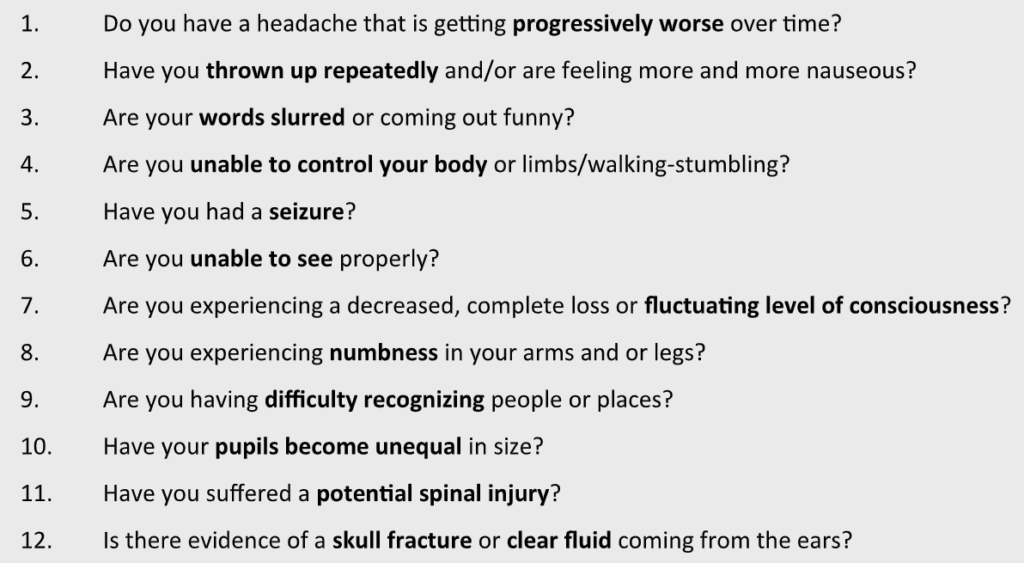 How long will it take to get better?

The brain needs to replenish those energy stores (ATP) and re-balance those chemicals (ions). Scientists think this takes about 2-6 weeks. People usually find the symptoms resolve within about 4 weeks. In fact, more than 85% of people feel fully symptom free within a month. However, we know that the symptoms resolve before the physiological changes in the brain have fully healed. In a small percentage of people, the concussive symptoms persist beyond that first month. Sometimes this is called Post Concussion Syndrome (PCS). We’re going to talk about that a bit more later.

Will it happen again?

While you still have a sports concussion, the risk that you will get another is high. In fact, if you get another concussion on top of the first one, you may develop a severe brain injury. There have even been cases of people dying because they suffered a second concussion before the first had healed. I don’t mean to scare anyone by saying this. However, it is important to understand that this is a serious injury. Rule number one of concussion recovery is…

Don’t get another one!

Once your concussion has healed you will still be at higher risk of having another. Certainly for the following 1-2 years but maybe even beyond that.

This is actually a very difficult question to answer. We know that the symptoms pass before the brain fully heals. So at the very least you must wait until your symptoms have fully resolved. Given that we know concussion symptoms resolve before the functional brain resolves, I recommend people follow this rule…

This is another difficult question. The best advice that I can give here is to discuss it with an appropriately trained medical professional. They can consider your individual circumstances and help you come to an informed decision.

Most people who have never had a concussion feel that the benefits of contact sports outweigh the risks. Once you’ve had a concussion, you might start to wonder if that is still the case. If you have had a number of concussions, you will certainly be wondering if it’s a good idea to continue with that sport. Again, this is not a question with an easy answer. Instead, I’ll offer a little more information for you to think over and discuss with your medical professional.

Post Concussion Syndrome (PCS) is the term originally used to describe the condition where concussive symptoms do not resolve within that first month. Sometimes that means the symptoms last a couple of months. However, on rare occasions the symptoms can persist for years.

PCS is very complicated. The reasons for the symptoms persisting are not clear. The term post-concussion syndrome has become less popular recently and nowadays medical professionals are adopting the term Persistent Concussion Symptoms (PCS). I actually prefer this term as it sounds less like a life sentence.

What should I do?

There are lots of things you can do to make this less unpleasant and speed up the resolution of your concussion. First thing first, get a proper diagnosis.

While the other things on this list will definitely be helpful, there really is no substitute for the guidance and expertise of a professional. It’s like doing your tax return, you can certainly do it yourself, but it would be much easier and more effective to consult an accountant. So the first question is which type of professional? This is where I’m going to show my own bias a little. As a physiotherapist, I honestly feel like a rehabilitation professional such as a Physio, Athletic Therapist or Chiropractor would be the best person to see first.

These professionals can do a full assessment and provide a clinical diagnosis. They can refer you to the appropriate doctors or surgeons for scans and further testing if they feel it is needed. They can also help you understand the problem and design a rehabilitation program that will help you recover as fast as possible.

We have all of these professionals available here at Collegiate Sports Medicine. If you would like to have a chat with us about how we might be able to help, we’d love to hear from you. Just give us a call.

We used to be far more restrictive with people recovering from concussion. It was common for people to be told to live in a dark room and do nothing at all until the symptoms pass. As research has evolved over the last few years, we know this is not the best approach. Now we advocate for symptom-guided activity.

This may sound like a strange term. The idea is to stay active but only to the degree that you feel able. I like to use a green light, orange light, and red light system. Green light means no symptoms, orange means mild symptoms and red is severe symptoms. Generally speaking, you can do whatever you want as long as your symptoms are mild. If the symptoms become severe, you have to stop. Over time, you will find you are able to be more and more active. You can see this in the graphic below: 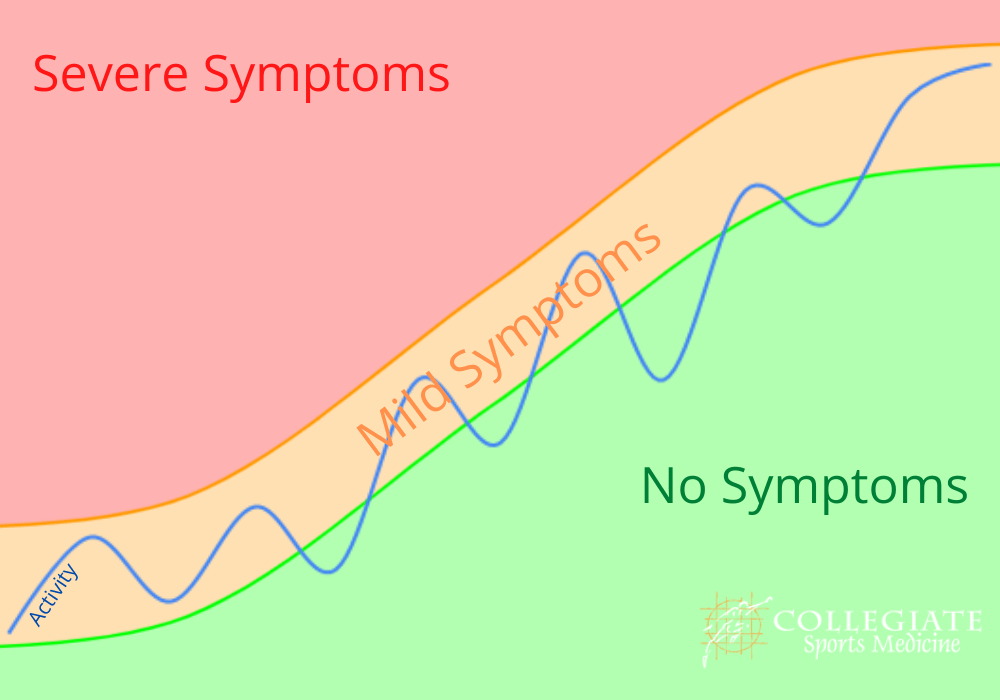 In this sense, no activity is “off limits.” You can go to work, do housework, go for a run, lift weights, go swimming, go camping … whatever you like. Your only restriction is that you must try to avoid that severe “red light” zone. If doing any of these causes severe symptoms, then leave it till next week and try again! I sometimes call this Living in the Green. If you can keep your symptoms in the green or orange zones you can still do stuff and recover quickly.

Research from the University of Buffalo has demonstrated that those people who engage in physical exercise recover quicker than those who don’t. The trick here is that the exercise needs to be very light. Many rehabilitation clinics offer exertion testing in order to determine the intensity of exercise it is safe for you to engage in. If you have not done any formal exertion testing then it’s still safe and appropriate for you to engage in light cardio exercise. 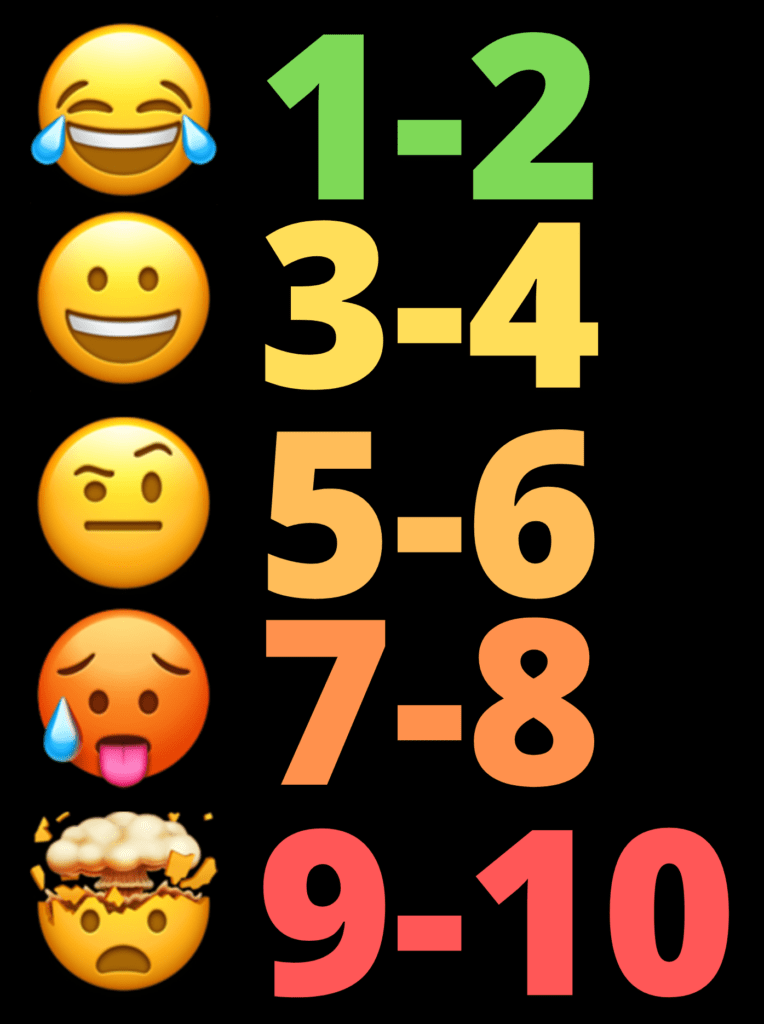 As long as you have no increase in symptoms, you can go as long as you like. I suggest my clients start at 10 minutes brisk walk at an intensity of 2/10 and see how they feel after. If that goes well, try 20 minutes, then 30. Once you can do 30 minutes brisk walk twice a day, raise the intensity a bit. Maybe 3-4/10. This may be a very slow jog. Start at 10 minutes, then 20, then 30. You can do this Daily Cardio 1-4 times a day usually.

Sports concussion is a serious injury. It involves functional changes in the brain rather than structural damage. The most important thing to remember is that you must avoid getting another concussion until you fully recover from this one. Complete rest is not recommended and symptom-guided activity and exercise will help you recover faster. It is always best to have the expert guidance of a professional, we would be happy to help you in any way we can. If you’d like to talk to us about it, just give us a call.